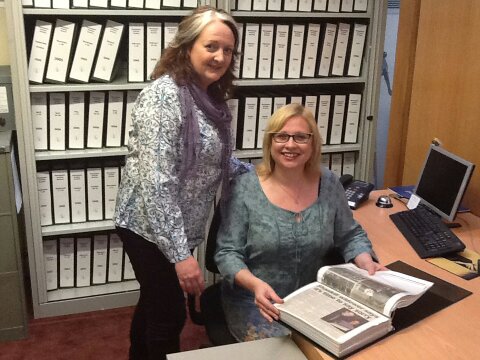 Healing Through Remembering has donated its extensive Newspaper Clippings Archive to the Linen Hall Library’s Northern Ireland Political Collection (NIPC).  The Archive has been an on-going project for HTR interns and staff since 2004, with clippings from as early as 1999 through to the Stormont House Agreement at the end of 2014.

The Archive contains news stories broadly relevant to the conflict in and about Northern Ireland that are published in three main newspapers: Belfast Telegraph, Belfast Newsletter and Irish News. The articles are categorised and entered into a searchable database that serves as a valuable resource to researchers and the general public alike.

On handing over the clippings archive, Kate Turner, Director of HTR said: “We are delighted that the Linen Hall Library has taken the HTR newspaper clippings archive.  It is ideal that this resource is now available to a much wider interested audience.”

The Archive can be accessed by visiting the Linen Hall Library, which is located directly opposite the front of Belfast City Hall (17 Donegall Square North).  In addition to HTR’s Newspaper Archive, the NIPC also contains thousands of books, pamphlets, reports, political manifestos, an ephemera collection of over 75,000 items, several other archives including that of the Northern Ireland Civil Rights Association and the Northern Ireland Women’s Rights Association and the Troubled Images exhibition.